Good news on a number of fronts my brewing friends! I got my first homebrewing award in the 25th Annual Southern California Regional Homebrew Championship! I took 2nd in Belgian & French Ales for my Lazy But Belgian, an American Pale Ale on White Labs 560 Classic Saison Blend yeast. Not bad for an experimental beer and my first brew in Vegas on top of that!

It’s slightly unfortunate that category 16 was the first to go since I’m such a passionate Saison guy and they’re in the same category. I can guarantee this won’t be my last category 16 award. It’s too much fun to stay away.

It’s also unfortunate that I can only get that yeast from Austin Homebrew because right now it’s about 112 degrees everyday and I don’t want to have my yeast pals shipped cross country in these conditions.

At any rate, you can find the recipe here and you can be sure I’ll brew that up again at some point in the near future.

My other news is that my Cicerone test yesterday went pretty well. I’m 90-95% sure I’m now a Certified Cicerone, although I’ll have to wait a while to know for sure. There is debate in the beer community here about whether or not being a Cicerone makes me that much more employable, but it’s nice to have something beer-related on my resume. Next up is becoming a BJCP judge!

I should be doing some brewing and bottling this weekend and early next week. I’m finally going to get around to the English IPAs I was planning when I started the blog & hopefully I’ll get my Gumballhead-esque beer thrown together as well.

I’m headed to Aces & Ales tonight for the SNAFU homebrewers meeting and it just happens to coincide with their Strong Ale Fest, so it should be a lovely disaster of beerliciousness.

I leave you with my Beehive Brewoff competition entries soaking in PBW (to get their labels off). The last 3 bottles of Lazy But Belgian & I Am Nelson Extra Extra Pale Ale.

A day late and 3 percent short. I took the Certified Cicerone (aka beer sommelier) exam in May and just finally got my results today:

Frustratingly, I needed an overall score of 80% (& at least 70% on the tasting) to pass, so I’ll be taking another crack at it at Caesars in a few weeks. At least I know my ingredients and process pretty well! I’ll study up and be fine for my re-take. I still can’t believe the graders at Cicerone could fail a poor little homebrewer who flew all the way to Iowa to take the test on his 30th birthday, but they did.

In other news, Friday’s brew session went pretty well. We did a single infusion mash & only a 60 minute boil so it was a pretty painless exercise. Joseph was a wonderful co-brewer. I’m slightly nervous about a mishap involving a discarded large metal spoon being taken from the sink and used to stir the cooling wort, but the Brett was stepped up so hopefully it out-competes anything we may have picked up. Regardless, this beer may be named Sink Spoon Brett Rye IPA. 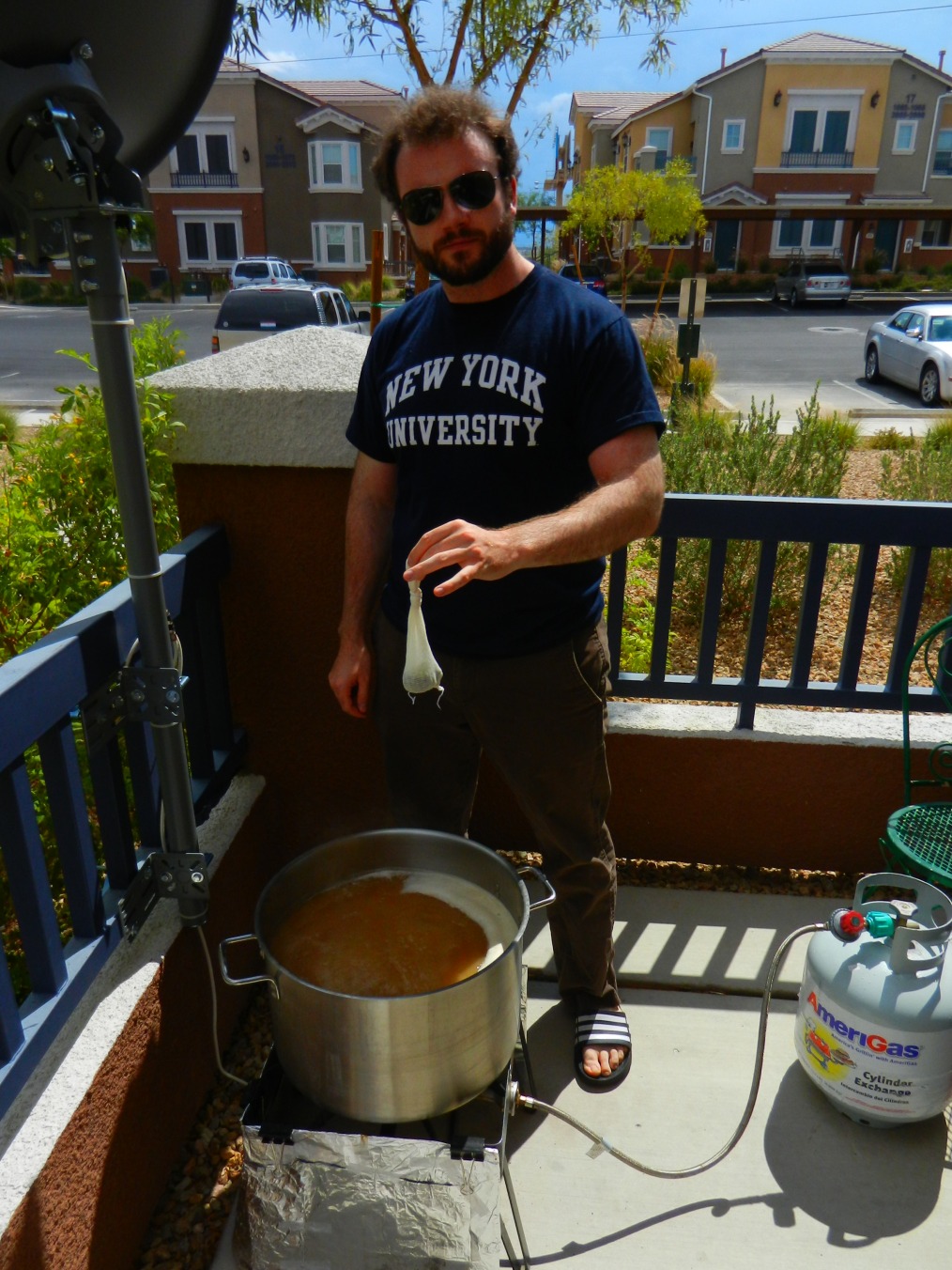 Pic above is Joe about to add one of the Citra & Nelson Sauvin hop additions. The WLP644 Brett starter tasted delicious. Tiny bit of funk and fruit. Really nice. I have high hopes.

Also, Joe & I now have our pictures on the wall at Cheeburger Cheeburger for finishing their 1lb burger. We even had shakes with it. Thanks to my usual silly impulses, I’ll now be known as “The Jackhammer” in local competitive eating circles. 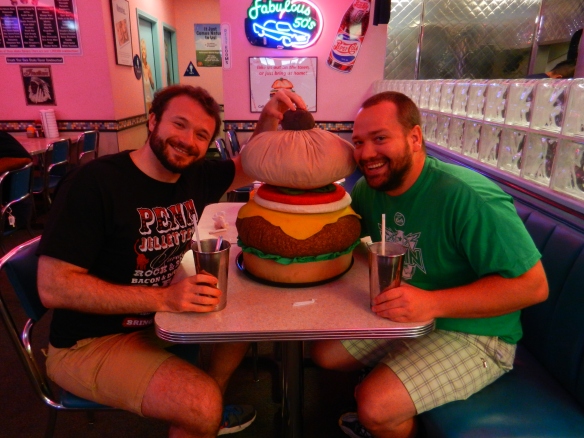 I have 3 entries headed to the 25th Annual Southern Cali Regional Homebrew Championship & I’ll be sure to update on how they do. It’s my first real competition, so I’m excited! My entries are:

Lake Water For Chocolate – My attempt at a chocolate pale ale with a big pile of orangey hops. Entered in American Amber Ale – category 10B.

Alright, time to throw together a saison recipe or two to brew tomorrow and/or Wednesday! Just got Belgian Saison III WLP585 from U Bottle It and it’s already stirring away. Also, I’ll be working on a way to integrate my recipes into the blog but feel free to ask in the meantime.