Yep. Saturday was obviously a good night. To celebrate I brewed an Amber with Chinook & Motueka hops and drank beer with friends. Although I would’ve done the same with no awards. It’s always a celebration when you’re a homebrewer!

Oh, I also sent my good buddy Weston Barkley a big thank you because he helped shape me into an award-winning homebrewer and not just a talented yet wayward smoke particle.

Anyway, here were all my winners:

Helles Too Good For You took 1st in both the Nevada State Homebrew Championship and Novembeerfest 2013 in WA. I knew I’d drank enough Weihenstephaner Original Premium to know a good Helles when I made one. The bottles I sent to Reno were a little flat from the beer gun, while the bottles that went to Washington should’ve been pretty dead on.

Dortmund! Borussia Dortmund! Dortmunder Export took 2nd in Novembeerfest for light lager. If you’ve been following along, that was the over-sized Helles 2 on WLP 830 from Big Dog’s. It was my only entry to fall short at the NV Championship and those bottles were also a little flat.

Wag The Dog Northern English Brown won the English Brown category at Novembeerfest. I would like to give it a little more chocolately, biscuity, malt backbone if I make it again, but it turned out nicely.

Mr. Bubbles Russian Imperial Stout (despite its smaller stature and weird minty hopping) got 3rd in Stouts at the NV competition. Sadly I only have one bottle left.

U Bottle It’s U Hop It IPA got 2nd in IPAs in Reno and the winner of the IPA category took Best In Show, so I feel really good about that result!

Breakfast In Antwerp Oatmeal Saison got 2nd in Belgian & French and my buddy Clyde got 3rd for his Belgian Pale in Reno! I’m drinking the re-brewed version of that beer right now in fact! Nelson & Mosaic are a wonderful combo!

It’s A Celebration Bitches! Smoked Dubbel took 1st in Wood-aged & Other smoked beers in Reno! I was waiting for the Best Of Show results and really hoping against all hope that a smoked beer had a shot. I was correct in thinking it didn’t.

Purring Kitten Session IPA (on WLP 006) & Unwanted Kitten (on WLP 002) both took 2nd in category 23 Specialty in Reno & WA. It is kind of a cool feeling to win the same award with a batch split on 2 different yeasts. As you can tell from the naming, I much prefer the beer on WLP 006 British Bedford. It adds a malty less hollow dimension that California Ale & English Ale have trouble providing.

I’ll try to get more of the recipes up on the Homebrewtalk forums, but anyone is free to leave a comment or email me and ask.

In other news, I’ve now brewed a Pale on WLP 041 Pacific Ale with Nelson & Citra, an Amber on a blend of WLP 041 & WLP 007 Dry English, & a Brown with Nugget, Chinook, & Galaxy hops on WLP 039 East Midlands (which apparently used to be called Nottingham). All of those beers fall in Category 10 American Ale, so if I can’t win something in 10 I’ll really have to go back to the drawing board.

My next 2 ‘brews’ will be a Kolsch with Calypso hops and a Petit Sirah red wine on Wyeast 3711 French Saison yeast. My plan is to age this weird wine on French oak chips and then age beers on those used chips. Who knows how it will turn out. All I have right now is a can & 3 smacked packs of glory (the can mentions mixing in an acid blend at the start so I’ll get that tomorrow): 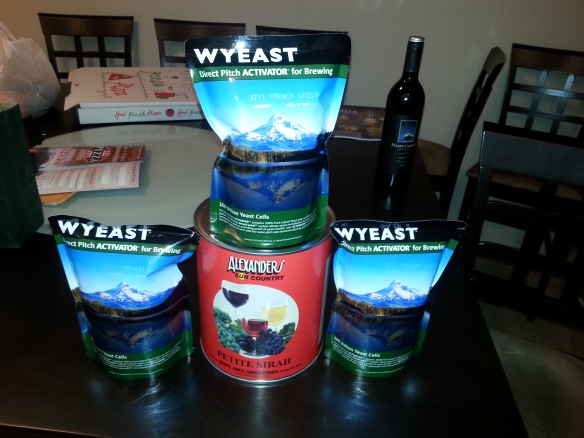 I’m sure I’m doing something horribly ill-advised, but I can always sour it and/or add Brett right? Or maybe I can find a competition for wines done with ale yeast. Sky is the limit!

I’m tired. Time to go to bed. Brew on brewing brothers and sisters. Because you know I will!